May 20, 2020
Why Overcoming Covid-19 is Just the First Hurdle of a Much Longer Journey: Irreversible Lung Scarring Possible in Survivors

Tvardi Therapeutics, an AIM-HI Accelerator Fund portfolio company, has won recognition as one of the ten “Most Promising” companies at the 2020 Texas Life Science Forum. Hosted by BioHouston and the Rice Alliance, the 2020 Texas Life Science Forum is one of the largest life science venture capital conferences in the Southwest. The three-day virtual event highlighted companies throughout the US in various stages of development, with a specific focus on the life science industry in Texas.
READ MORE

Tvardi is striving to formulate a new class of medicines for multiple cancers including hepatocellular carcinoma (HCC) and fibrotic diseases. Tvardi understands the key role STAT3, a signaling molecule, plays in countless pathways supporting the survival of cancer cells and their ability to hinder immune responses.

More than 50% of all cancer types are activated by STAT3 and studies have shown that inhibition of STAT3 promotes cancer cell death and slows cancer spread. Additionally, approximately 40,000 patients are diagnosed with HCC and sadly a large percentage of them will die from the disease. Tvardi strives to provide alternatives to patients and change this unfortunate truth.

As Tvardi continues to make exceptional progress, the company was recognized by others as they present another outlook to hopefully increase the chances for patients suffering with advanced solid tumors. Many noted how a majority of cancer patients are affected by STAT3 and admit the lack of therapies available that exhibit improvement. Therefore, they have since come forth to contribute towards Tvardi’s objective.

Mid-year, collaborators including the National Cancer Institute received over $5 million in non-dilutive grants to aid in the development of STAT3 inhibitors. Additionally, funding from the PREVENT program allows to form translational work concentrating on preventing HCC, totaling to $20 million in funding.

AIM-HI is proud to support Tvardi in its early stage development as it’s our mission to provide critically needed seed funding and resources to oncology startups that translate breakthroughs in discoveries into effective new cancer therapies and diagnosis and eventually, save patients’ lives. 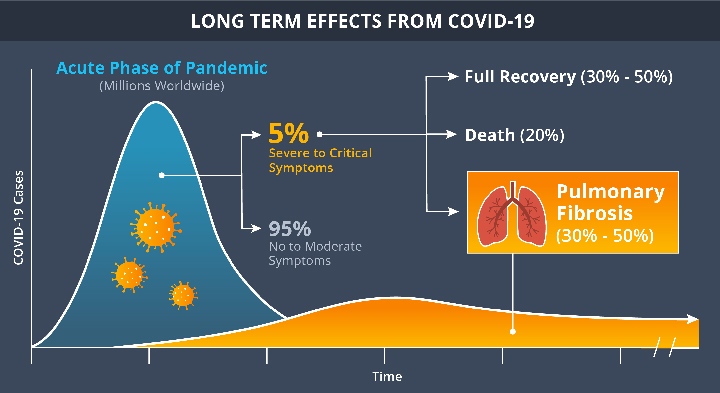 HOUSTON (1080 KRLD)- The majority of people who get the virus will get well without serious complications.

Some may not even show symptoms. But a small minority, about five percent, do get seriously ill and require hospitalization. That group is at risk for developing pulmonary fibrosis, which is a scarring of the lungs.

Dr. Ronald DePinho* is the co-founder of Houston based Tvardi Therapeutics, which is working on a drug to help such patients.

“There’s hope we can manage these patients and improve their lung function, but we need those medicines that can actually reverse and block it from happening in the first place, or it does happen can reverse the process.”

SARS is a cousin of Covid 19. Dr. DePinho says in the case of SARS patients back in 2003 “the disease (pulmonary fibrosis) takes hold and about a third of individuals have permanent lung disability, but it was not progressive.

In the case of Covid 19 we don’t know if this is going to act similarly.”

In other words, the hope is the drug Tvardi is working on could reverse the otherwise deadly disease.

DePinho adds about half of the people who have non-Covid related or idiopathic pulmonary fibrosis die within two to three years.

Listen to the Radio Interview

*It’s important to note the comments made during this interview are Dr. DePinho’s personal opinion and do not relate to his role at MD Anderson.

While a longer recovery course might be expected for someone such as Herbert who faced a more severe illness, there’s also concern for more permanent lung damage, according to Dr. Ronald DePinho, professor and past president of MD Anderson Cancer Center and co-founder of Tvardi Therapeutics. DePinho is particularly worried that the immune response to Covid-19 may cause irreversible scarring known as pulmonary fibrosis.

Pulmonary fibrosis can be a “relentlessly progressive” disease of the lungs in which patients can become dependent on oxygen or even ultimately require lung transplants, he said. Again, this is after a patient is thought to have “recovered.”

Though it’s too early to know whether patients with the novel coronavirus will develop this sort of lung scarring, studies in other related coronaviruses, such as SARS and MERS, suggests certain Covid-19 patients may have lasting fibrosis. One study following 36 MERS patients found a third still had lung fibrosis on chest x-rays after a median follow-up of 43 days.

And up to two-thirds of patients with SARS who were sick enough to require hospitalization also developed pulmonary fibrosis, according to DePinho. If the same pattern holds true for Covid-19, that could mean many thousands of people will have long-term lung scarring, he said.

The data from China thus far is still thin, but the early results follow the same pattern DePinho is describing. In a study of 63 Covid-19 patients from Wuhan, China, about 18% had “fibrous stripes” on CT scans. And in another study, it took more than 6 weeks for one patient’s chest CT to return to normal, even though his symptoms had already improved.

This might explain why some patients have significant drops in their lung function even after recovering from the novel coronavirus. Losses in lung function could be as high as 20 to 30 percent, the medical director of infectious diseases at Princess Margaret Hospital in Hong Kong told a media briefing in March.